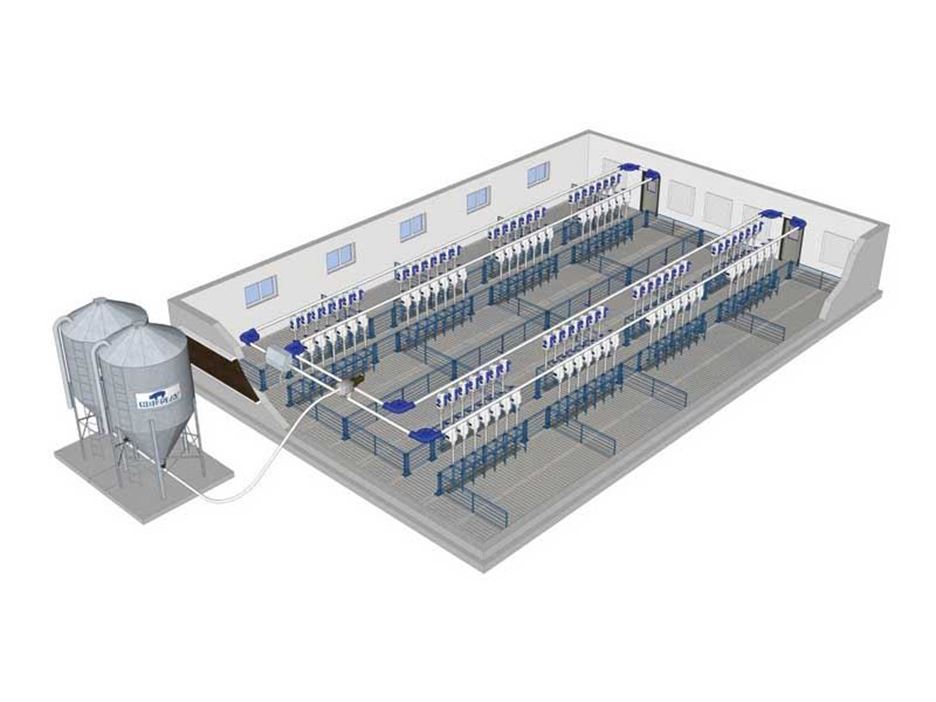 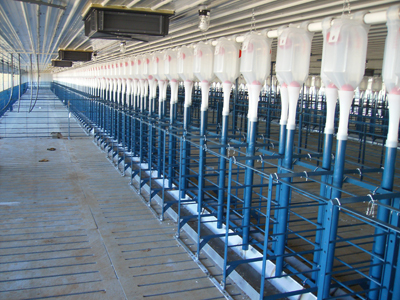 As the swine industry searches for alternatives to stall gestation, another option has emerged and is in the process of being refined.  Stanchion Housing refers to short stall-like dividers that are added to open pen gestation to separate and protect the animals as they are fed.  It is a refinement over traditional open pens where sow are fed on the floor and group size must be limited to reduce fighting.

To date all the systems have been designed with standard gestation stalls in which the sows are weaned and remain until they are bred and preg checked.  Typically this would be about a 45 day inventory of the total sow numbers. 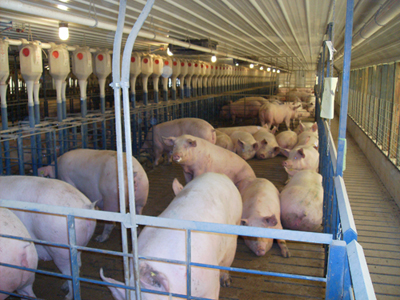 Looking at the total number of animals in a breeding group, a decision can be made on total numbers of sows per pen.  Current stanchion systems range from 10 head per pen all the way up to over a hundred.  Many producers choose to break a farrowing group into two or three different pens as this allows for grading and sorting weaned animals by body score.  Placing sows in similar groups reduces fighting and allows for uniform feeding.

After total number of sows per pen is determined, the next design consideration is the amount of square footage per animal.  Current EU welfare regulations require 24 sq ft. and some producers have chosen to follow that guideline, but systems exist that range from this level all the way down to 17 sq ft./sow.

Two critical design elements have proved themselves in the existing layouts. 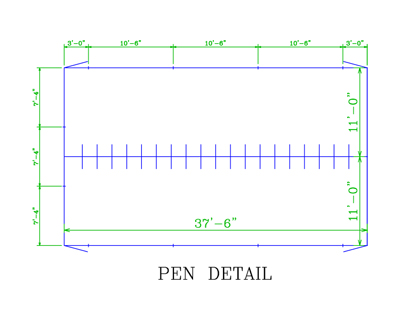 First, long narrow pens are preferred as this prevents a boss sow from blocking feed stanchions.  The second design feature is placing the stanchions head to head in the center of the pen rather than placing them along the alleys.  Because the stanchions are not in the alleys, the sows can be viewed from the rear during feeding for problems.  It also allows for easier animal movement in and out of the pens as the gates are not part of the stanchions.  In addition, the number of feed lines needed is reduced.

The first stanchion systems featured trickle feed equipment where the feed slowly dribbled in front of the sows at meal time, the idea being a slow placement of feed in front of the sows would hold them in the stalls and prevent boss sows from “wolfing down” their feed and moving up and down the line stealing feed.    In practice, the additional cost and upkeep of a trickle system did not justify its use and has been omitted on new installations.   Current systems use standard feed drops that dump the entire ration into stainless steel troughs or on a solid concrete floor. 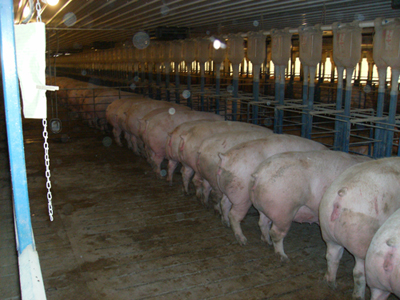 Equipment used in a head-to-head layout consists of stanchions that are 40” tall and 19” long.  These dimensions protect the face and ears of the individual sow from aggressive pen mates.  Ideal width has been determined to be 20” as this prevents other sows from crowding in to steal feed.   Early systems used solid dividers; as we gained more experience with head-to-head systems,  the use of open dividers was adopted.   The Hog Slat equipment used to configure this layout is an adaption of our standard gestation stall which has been used throughout the industry for over 30 years.  The stanchions are constructed of solid horizontal rods with angle top and bottom rails, the entire unit bolts together with galvanized floor spacers and double top spacers for added stability. This style of stanchion fits completely with the standard 40” gestation penning used in the rest of the pen layout.   The result is a well-designed system that goes together without a great deal of “field fabrication”. AquaChief cup waterers are added at the rate of one per 11 animals to provide fresh water. 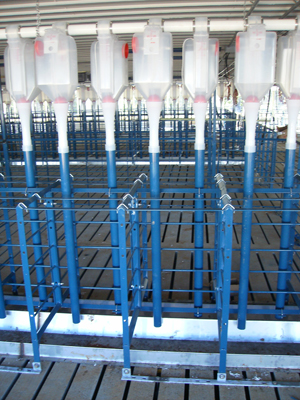 Many of the stanchion systems are remodels, the layout of which has to be adapted to existing slat /solid configurations. If building new projects most producers opt for using total slats as this allows for more flexibility in the event of changes in the welfare regulations.

Stanchion systems require a high degree of stockmanship to operate successfully.  Boss sows must be culled ruthlessly and individual care of animals is more difficult than standard stall systems.  However, for many production systems, stanchions are a better alternative than Electronic Sow Feeding. Stanchions allow group housings of animals without the costs and high maintenance associated with ESF stations.

For more information please contact your local Hog Slat rep or contact us by email at frichards@hogslat.com.